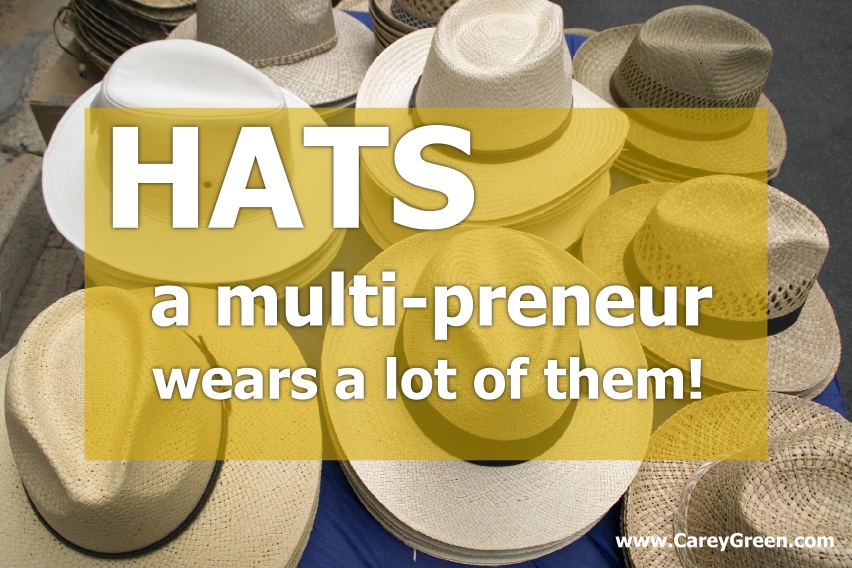 I thought I had made up the term, but it seems that there are quite a few people throwing it around these days.

It’s the word I think of (but don’t actually say) when people ask me,

What exactly IS it that you do?

I don’t actually use the word because then I’d have to explain to people what THAT means. I’d rather just take a stab at it in terms they understand.

But for your sake, since you’re reading this post, I’ll try to explain how I understand the word, “multipreneur.”

In my thinking, a multipreneur has at least these 5 character/personality traits:

And I’m not talking about a selfish type of ambition (though I guess it could be that). What I mean is that a person I’d consider to be a multipreneur has to have their own, internal drive that gets them moving in the direction of accomplishment and success. They don’t have to have anyone telling them what to do, they figure it out on their own. “But wait!” you might say, “That sounds like a typical entrepreneur or business owner, to me!” Right you are.  Ambition alone does not the multipreneur make.

2. A drive to figure things out

A multipreneur doesn’t wait around for someone to teach them… he/she goes out and finds the information needed to get moving in the direction they desire. You could call this being “self-taught” or able to teach themselves. But again, that could be said of a regular old “entrepreneur” as well. So, let’s keep going.

Add to ambition and a self-teaching bent, a variety of interests and skills. Here’s where the difference between an entrepreneur and a multipreneur begins to take shape.

Many folks would be tempted to call a multpreneur “unfocused,” because he has so many irons in the fire. I guess that could be true from a certain perspective. But in my experience, it’s not that at all. I’ve come to see that the good LORD has given me many different interests, and an above-average amount of talent/skill within each of those interests. That equips me with an ability to do a good job at many different things.

4. Willingness to “take the plunge,” over and over again

Need a LIFE COACH? I do life & success coaching, rooted in the scriptures and aimed at practical living.
Here is the start of the defining characteristics of a person I’d consider to be a multipreneur – they are willing to start many different entrepreneurial endeavors, one after another. It’s not that they leave the first idea hanging, in order to get started on another. They keep the first plates spinning and then add a new project, idea, or venture to their already demanding schedule. For example, right now I am actively working on and promoting all of these projects/ventures:

I don’t care who you are, I dare you t0 say there’s any kind of rhyme or reason to that mess… other than the fact that I jumped into each of theme out of desire, and a belief that I am SUPPOSED to be doing them. I did so, knowing that every one of them would place an additional burden on me. I did so knowing that the more I add to my plate, the more carefully I have to manage my schedule and time, for the sake of my family, and for the sake of my sanity.

5. A delight in being busy with a variety of things

And here is the really weird part. I actually LIKE being that busy, and so scattered in my interests. It’s fun to me. I love the creative part of coming up with ideas, figuring out how to make them work, and putting together systems and processes to keep them rolling.

I know, it would drive some people crazy, but that’s the beauty of being one of God’s creatures. He’s made each of us unique and points us down a path that is right for us.

It should go without saying, but I’m going to say it anyway. If you think, or know, that you are a multipreneur, be careful.

A caution for you non-multipreneurs

Don’t be so quick to label us multipreneurs as “un-focused” or “undisciplined.” We don’t really expect you to understand, because you’re not wired like we are. But at the very least, give us the benefit of the doubt. Multipreneurs, just like you, are reasonably mature adults (in most cases), and make their decisions with forethought and wisdom most of the time.

We’re not wrong, or bad, we’re just different than you.

I wonder what you think of this idea of being a multipreneur? Does it resonate with you? Does it make you cringe?